narrative essay by River Greenwood
From as early as I can remember, “female” has felt like a box I had only one foot in, at the most feminine of times. At the most masculine of times, “female” stung like a flick on the neck with a rubber band, reminding me what people think I am despite what I felt inside. I can vividly remember being a child in elementary school and dreading roll call on the first day of class every year, because then everyone will know my name, and my name is a girl’s name. I knew that I’d raise my hand and people would think, “That’s a girl’s name, but the person raising their hand looks like a boy. So what’s wrong with her?” That feeling was gender dysphoria. If you asked me how many times I’ve heard, “Are you a boy or a girl?” I couldn’t give you a number. I could only try to explain a feeling of exhausted familiarity, the feeling that comes from being asked the same question your whole life and still, despite all the practice, never feeling like you can give the right answer. The feeling of sinking dread when you remember that you’re not just the you that you know, you also exist as the you that others perceive, and if they can’t get this right, how will anyone get anything else about you right? It’s a lonely way to live.

When I moved from a largely accepting international school community in Norway to an ignorant and backwards public school in Alabama, I was told by peers in no uncertain terms that I was unacceptable to them. Repulsive, beyond comprehension, freakish. So I stopped spiking my hair (the ski-slope thing that boys my age loved to do — minus the frosted tip), stopped wearing the cargo shorts and camo. I got some “girly” clothes and a bright green hair clip. And I remember looking at myself in the mirror with the hair clip in my hair and crying, because a) I could see I was beautiful in a way I hadn’t seen before and b) the person in the mirror was me, but it wasn’t. It wasn’t all of me. It could have been me for a day or so. But it didn’t encapsulate who I was inside, who I had been for all the years before. It felt nice, but it didn’t feel whole. It didn’t feel comfortable. That’s still how I feel when dressing especially feminine, a lot of the time. Sometimes I feel fine, though. Such is the life of a nonbinary person.

You know, I worry about bathrooms. Which one will I use if I start taking testosterone or get top surgery? I wonder about hormone therapy and top surgery because they’ve always been private options for me. I forget sometimes that these options would be noticed by others and I will have to explain. For me, they are deeply personal. In a perfect world, I could make these changes and they would be affordable, they wouldn’t make me any less safe in the world, they would be noticed by others the way that maybe a haircut would be: in passing, pleasant and casual. I remember all the times I ever watched TV shows with trans* folk in them, and I remember worrying that I would be one of the people that doesn’t start transitioning until they’re in their 30s or 40s. Because I knew, I’ve always known, that something I was doing didn’t feel right. It doesn’t feel right to be gendered solely as male or female. I thought maybe in my 30s I’d just realize I wanted to transition to male, but that’s not it. What I’m trying to teach myself now is that how I feel now and what I have felt my whole life is valid, as is. There’s a community out there with the vocabulary to help me feel valid in a way I’ve never felt before. It’s hard, it’s real fucking hard. The communities that you would think would be our biggest allies (LGBT) are turning out to be just as capable of venomous rejection as cis and hetero folk. Society isn’t built around “other.” All the boxes you fill out are a reminder that you’re not welcome as you are. Every “F” or “M” choice I make feels like a chip at my authentic self. It’s such a vulnerable position to be in when your very existence is at war with seemingly impenetrable structure after overlapping structure. I still struggle to speak about this aloud, so I hope this doesn’t feel inconsiderate to those who feel like I should have told them directly. This long and rambling monologue is the most comfortable way for me to do this, I’m afraid. I’ve only done so in person (in tears) to my best friend/husband. I’m writing this in tears. I fear rejection, I fear hate, I fear repulsion, I fear being misunderstood, I fear invalidation, I fear leaving myself so vulnerable to attacks (big and small, direct and indirect).

Working in settings that are hostile to non-binary people has been especially dysphoric for me. In customer service, you’re expected to squash yourself into a corporately acceptable box when interacting with customers. Frequently, children of customers would ask if I am a “boy or a girl,” much to the horror of their parents. The parents, well-meaning but unknowing of the damage their words did to me, would explain that I am a woman with short hair and that’s okay. Obviously women with short hair are valid and allowed to exist, but nobody asked if that’s what I was. If it were up to me, I’d tell their kids that I’m just a person, kind of a boy and kind of a girl, and it’s okay to be curious. That not everyone needs to fit into one of two boxes called gender. But what I had to do was smile and nod, all the while on the inside writhing with the discomfort of being misgendered. When I went to buy my lunch at work the other day, and the cashier called me “sir,” I smiled! But then, he thought he made a mistake. He started apologizing profusely, while I tried to explain that I genuinely don’t care. I don’t care. In truth, I found it validating to not be gendered as a female for a change. These candid conversations aren’t happening at such a casual level yet, though. I can’t explain that I’m nonbinary to a stranger. I can barely explain it to my friends and family. It’s so scary. It’s so, so scary, but I am constantly inspired by people in my queer community and my non-binary friends. If we’re not the ones to push the conversation further, who will? Who will be the ones defending and clearing a path for kids like me, who felt absolutely alone because there was nobody out there who looked like who I was inside? This photo I found of myself as a kid, it struck me. The tenderness I felt towards my little brother is so clear. Tenderness is such a beautiful feeling, and it is beautiful without being gendered. I just wish the kid in the picture had been given the same consideration. 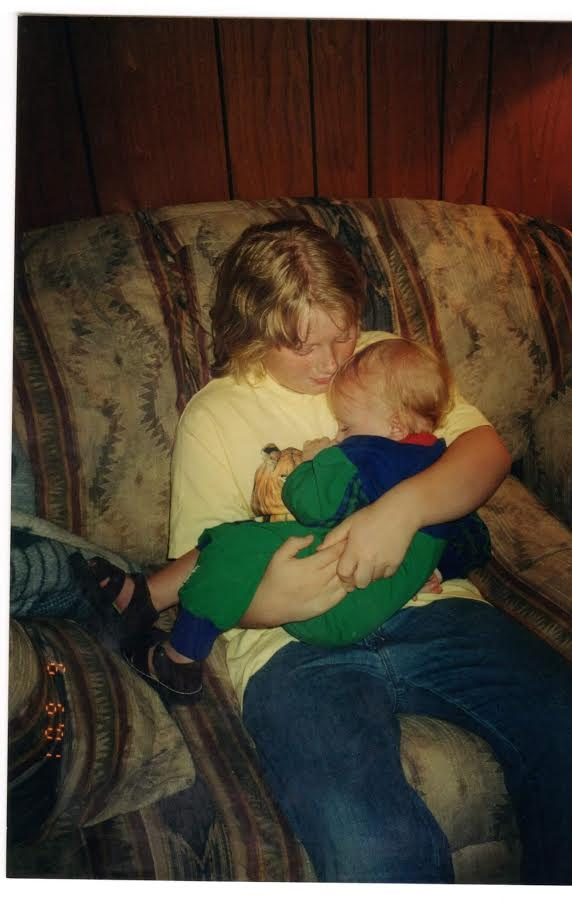